It seems customary to write one of these posts after attempting a CCIE or CCDE. At first, I resisted as I didn’t see much value in reporting my experience out – at least not over what others have already written and can be found with a Google search (which is far more likely to return a result than this posting). Nonetheless while attending the excellent session LTRCCDE-3006 at CiscoLive this year I was proven wrong.

I took the session for the second time; my first was last year when my CCDE preparations first started in earnest. It was very good I thought and helped give me a feel for the test, the style and the material. I still didn’t pass (the practice test) this year but I enjoyed the experience. I should note the scenario did NOT change between this year and last year. If you are multiple years in pursuit of your CCDE then you might want to confirm the scenario before booking it and paying the costs for it.

Recommendations for the Test

About the testing center

The testing center was nice enough but definitely a stickler for the rules and confirming my identity at each step. I mentioned taking a break but it was agonizing to know the clock was ticking while I waited for the person overseeing the test to enter the room, lock my computer and then and escort me out. Only to go through more checks with the front-desk person and then repeat the process in reverse.

The monitor was 24″ or so and big enough to allow me to have a question up on the left side of the screen and some exhibits visible on the screen as well. I ended up with a layout something like this: 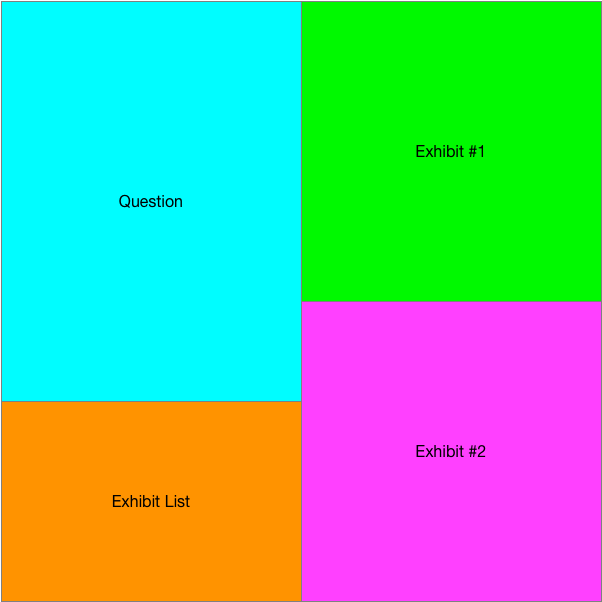 I felt it worked well and allowed me to work through things quickly. I did have instance where I had 3-4 exhibits up at once and struggled to put it all together on the monitor space – but it was better than a “normal” Pearson testing site’s monitor. As per the usual, the keyboard and mouse are stock, cheap units that come with the low-end towers used for the test. This was as expected and I had no issues with the hardware or testing software throughout the day.

The testing center staff were nice and well prepared for the duration of the test. They commented about not being familiar with the specifics of the test or the identification and lunch break rules. Nonetheless, they adapted quickly and I had no major issues with either of the “shifts” of staff at the site (they staff changed sometime while I was away on lunch).

I scoped out places for lunch and had those ready and in mind. I ended up eating an okay lunch but I spent only 35 minutes away from the test center. I was paranoid about not making back in time or having some issue. I also picked a place within walking distance in case things went off the rails with my car. The testing center kept being slightly thrown by my leaving – but the personnel would reference some sort of posted cheat sheet and agree I was allowed to go. Just don’t panic/be aware leaving the center in the middle of the test is uncommon and the staff may need a minute or two to confirm things.

I found the test to be hard for me but I knew I wasn’t fully prepared for it going in – I hadn’t reached my intended level of preparation before the attempt but still felt it was important to proceed to help remove some of the mental barriers regarding my first attempt. I also looked at the cost for additional on-site training seminars and determined taking the test once and failing it, even as a preparatory step was a good cost tradeoff. Besides, maybe, just maybe, I did better than I expected and I passed…

Nonetheless, I will look to write another of these after my planned next attempt in September. I’m hoping to also then write the “I passed and here are the materials/methods I used!” blog post. We’ll see.